The roast sirloin joint Comes from the sirloin section, which is on the back of the beef between the fore-rib and the rump.

The whole striploin, or sirloin, is a primal cut to be found beneath the back of the animal. It is located between the ribs and the fillet. That’s how it gets its name, which comes from the French ‘surloine’. meaning ‘below the loin’, as loin is the old name for the fillet.

Method
Heat oven to 200C/fan 180C/gas 6. Heat the oil or fat in a large flameproof roasting tin in the oven for 5-10 mins. Season the beef all over.

Place the joint fat-side down in the roasting tin and put it on the hob. Sizzle to release some of the fat. Turn the beef in the fat to seal and colour it all over for about 5 mins. The joint can now be roasted, fat-side up. Allowing 10-15 mins per 450g for medium-rare, 15-20 mins per 450g for a medium, 20-25 mins for medium-well and 25-30 mins for well done. Turn the joint halfway through its cooking time for an even roast. Once cooked, remove the Roast sirloin joint from the pan and leave to one side, loosely covered with foil, to rest for 15-20 mins.

Meanwhile, pour off any excess fat from the roasting tin, then put the tin on a medium heat on top of the stove. Once it begins to sizzle, pour in the red wine, allowing it to boil rapidly until almost completely evaporated. Tip in the consommé and allow it to simmer for 4-5 mins. This will give a light sauce, rather than a gravy (see tip, below). Simmer for a few more mins before straining through a sieve for the smoothest of finishes. Carve the beef into thick slices, offering the gravy separately.

There are no reviews yet.

Be the first to review “Roast Sirloin joint” Cancel reply 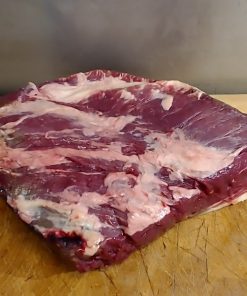 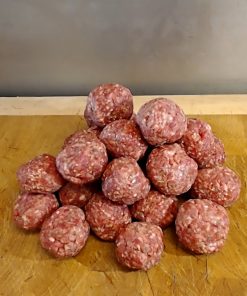